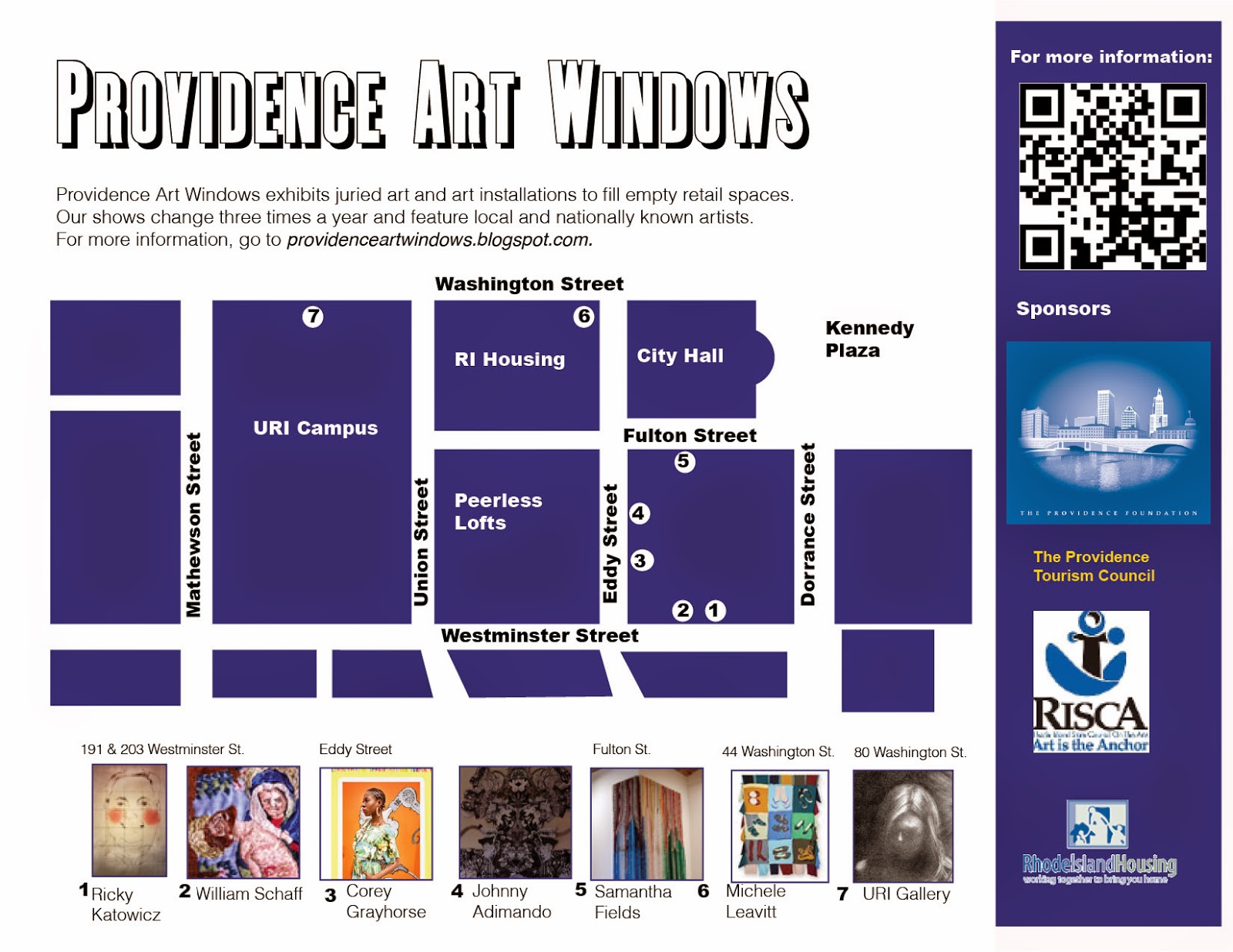 New works by Johnny Adimando in the renewed Eddy Street window and fiber art by Michelle Leavitt  will be installed in these two windows by December 2. Illustrator Mary Jane Begin fills the University of RI Library window as part of a larger exhibition inside the URI Gallery related to  ART AND HEALING:REMEMBERING CHRISTIANE CORBAT–THE WORK CONTINUES. Please print the map, see more information about the artists below, and enjoy the walk. Other windows will be changing later in winter.
Posted by Director, PAW at 3:04 PM 1 comment: 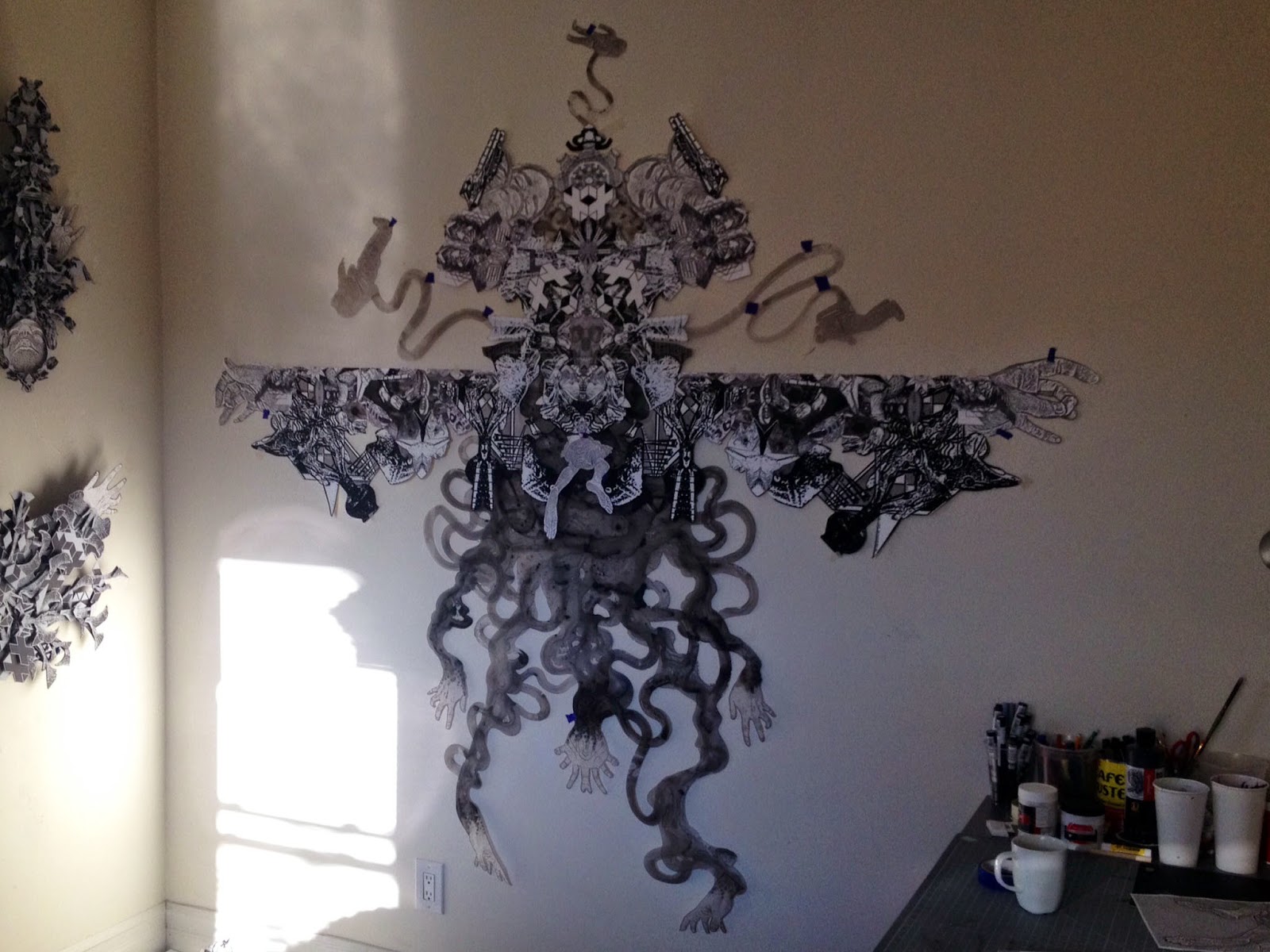 Johnny Adimando returns with new works on paper. More information coming soon. The installation will be installed by December 2, 2014. Above is the work in progress.


About the Work
I learned the camouflaging properties of beauty, the navigation of intricately organized spaces, and the virtues of cleanliness and order at an early age.  At this time, I was also made to understand the existence of the omnipresent “other.” As such, the images in my work are decidedly labyrinthine, implying a constantly shifting-scale, referencing the shuttle cockpit, religious conclave, and burial chamber. The visual dynamic is one of complex symmetry, coordinated patterns, and elaborate constructions that form symbiosis with spectral visions and occult symbology.

I believe the world; as we know it, is a panopticon, and the “divine” is an ever-present watchman. Through my work, I explore the good-intentioned processes of self-imprisonment by way of dogma, fear, and morality. I am interested in this notion of the pursuit of perfection while under surveillance, and I continue to explore the confounding notion that servitude to any outside source can truly function in an ever-expanding universe.

About the Artist
Johnny currently lives and works in Providence, RI.

Johnny Adimando is currently part-time faculty in the departments of Painting and Printmaking at the Rhode Island School of Design. He has also served on the Printmaking faculty at the Montserrat College of Art and Bucknell University.  Adimando earned his BFA (’05) from the Tyler School of Art at Temple University and MFA (’09) from the Rhode Island School of Design.  He is the recipient of several major awards including a two-year fellowship and artist residency at Bucknell University (’05-’07), the Temple Rome Grant, a Frogman’s Print and Paper Workshop scholarship, and most recently, a Faculty Professional Development Grant from RISD.

His work has been exhibited nationally and internationally, and is held by public and private collections including ; Philadelphia Free Library, Samek Art Gallery at Bucknell University, and Tower Investments Gallery in Philadelphia, PA.  His work also appears in a multitude of national print exchange projects and flat file programs.  He is currently represented by Diane Birdsall Gallery in Old Lyme, CT and Yellow Peril Gallery in Providence, RI.

Adimando’s practice is defined by a focus on intense detail, technical proficiency, and the harmonious mixture of various mediums.  His work does not subscribe to one particular convention; bridging dedicated engagement with various print media processes into photography, sculpture, and video.  It has been described as “art that speaks to a constantly shifting and material reality.”

For more on Johnny Adimano’s work, please go to johnnyadimando.com 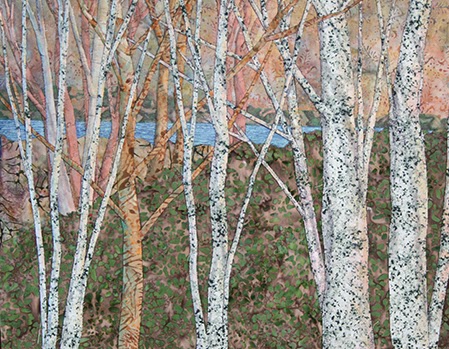 
About the Work
Cotton knit material behaves in interesting ways.  Here, several tee shirts are cut to create two squares, the colors are shuffled and layered.  The shoes - which are mine, my boys,' and their friends shoes - are 'drawn' on via machine stitching and then cut to reveal the images in color.


About the Artist
Problem solving is at the core of my practice, as ideas arise, I explore my media for the best ways to express these. The whole work becomes a challenge both in technical and pictorial terms. My work evolves from the available materials, the technical challenges, and my love of experimentation. Materials include paint and canvas, paper and pencil, watercolor, and especially collage and textiles. I did study art academically while I never had sewing lessons, instead I’ve made up techniques according to pictorial needs. The works express my personal reflections on living here now.

On her fiber art:
“Exploring these art forms for adaptation to new uses or another style intrigues me.  For instance, there are several textiles in this category I fondly call frazzlin' appliques.  My mom used the word frazzlin' to indicate a small frayed snippet of fabric.  Here, frazzling scrapes of fabric - saved over decades as too interesting to toss out - are combined to describe familiar landscapes.  Quilting, my original form of creative play, adapts to both pictorial and abstract applications.

The word frazzle is distantly related to the word fringe.  The fringe is the end of the carpet or other textile where the fibers come apart into individual strands. This leads to the next group of works,  hand knotted carpets.”

For more on Michele’s work, please go to michelleavitt.com 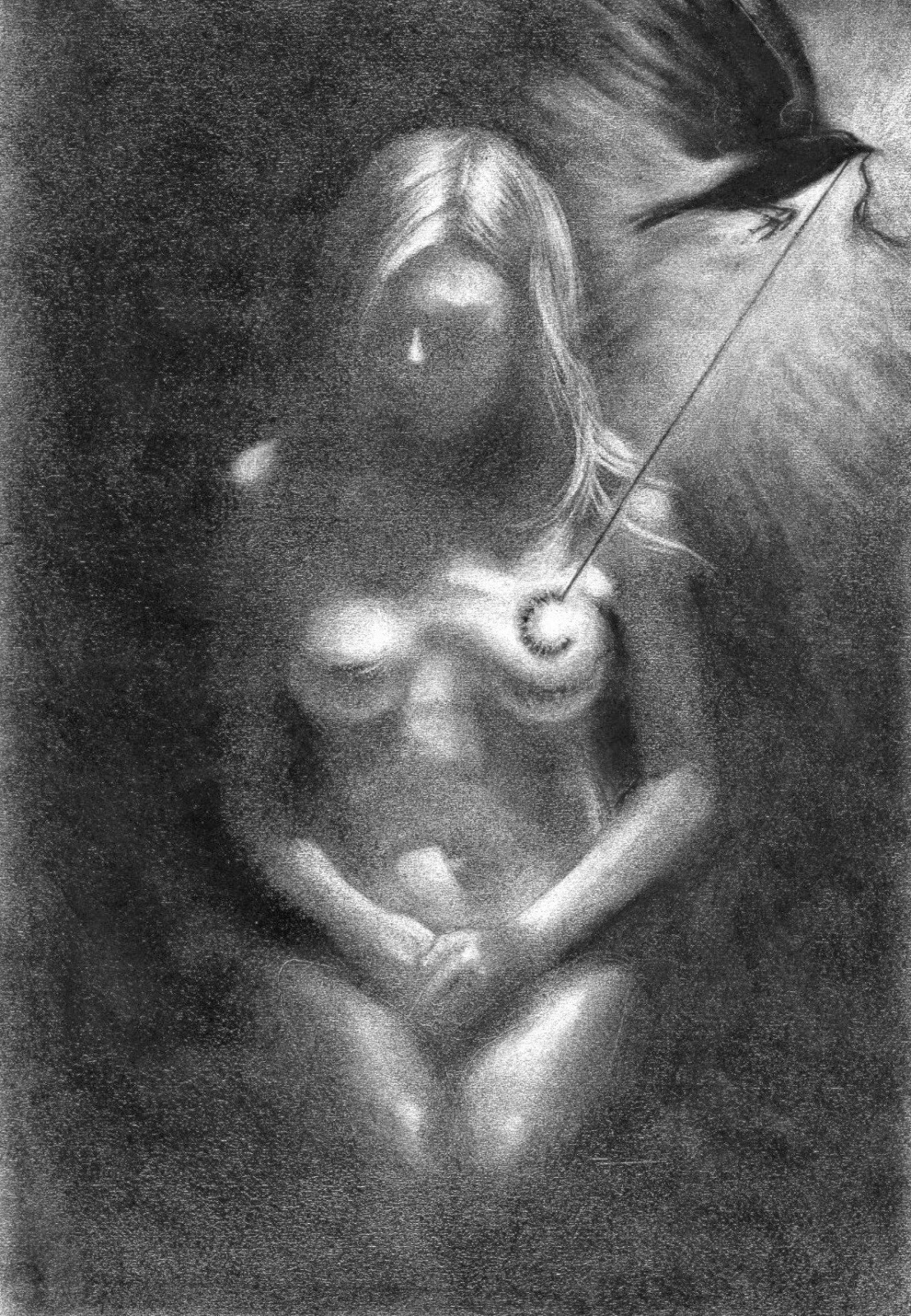 In the Window: Mary Jane Begin
Posted by Director, PAW at 2:55 PM No comments: