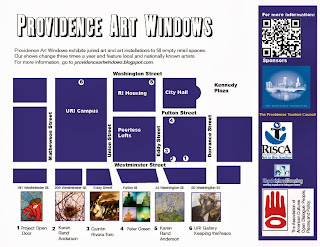 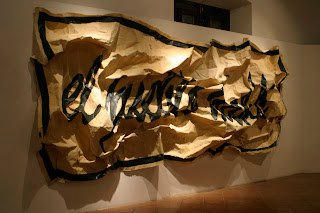 The painting "el pueblo habló" (the people spoke) - 2009 is part of the series titled "Weak Paintings" which were all made in reaction to the global upheaval caused by the 2008 market crash. The canvases are wrinkled, the text is crumpled, as if to say that these are discarded statements, like a piece of paper ready to be tossed into the trash.

About the Artist
Quintín Rivera Toro was born in Caguas, Puerto Rico in 1978. He holds a B.F.A. in Sculpture from Hunter College, New York - 2001, as well as B.A. in Communications and Film Studies, from the University of Puerto Rico in Río Piedras - 2007.  He received his M.F.A. Degree in 2013 from the Sculpture Department at the Rhode Island School of Design in Providence, Rhode Island.
In his native Puerto Rico, he was awarded The Lexus Grant for artists; His public art project “Un espacio libre” originally shown in his hometown of Caguas, was invited to travell to El Museo del Barrio for the S-Files biennial and the art fair PINTA, both in NYC; It was also shown in the Museo de Arte de Puerto Rico and with F.I.S.T. ART in Dorado. His photographic work received an Honorable Mention from Puerto Rico's Museum of Contemporary Art and a First Prize award from the University of Sagrado Corazón's Contemporary Photography Contest, in San Juan. He co-founded and worked as the Director of ÁREA, lugar de proyectos in Caguas.
Quintín has been awarded the DAAD German Academic Exchange Travel Grant, with which he travelled to Cologne and Berlin in Germany; Full fellowships for residencies at the Vermont Studio Center, in Johnson, Vermont and the National Academy of Design in New York City; He has also been an artist in residence at the Ox Bow School of Art, S.A.I.C., in Saugatuck, Michigan; He worked as an intern at the Chinati Museum in Marfa, Texas; Studied with the Escuela Internacional de Teatro de América Latina y el Caribe (E.I.T.A.L.C.) in Cuernavaca, Mexico; His work was selected by Zona MACO art fair as a focused work, and displayed his "Weak Paintings" in a solo booth sponsored by VH1; He was awarded an Achievement Scholarship from Transart Institute and completed their summer residency program in Berlin, Germany. Quintín is a Rhode Island State Council for the Arts (R.I.S.C.A. - N.E.A.) Individual Artist Grant Recipient, and has received a Sylvia Leslie Young Herman Scholarship Award, and Academic Honors from the Rhode Island School of Design.
He was included in refinery29.com's "Top 10 list of rising NYC art stars" curated by Casey Fremont.
Visit: www.refinery29.com/nyc-best-young-rising-artists
Most recently his artwork was cited in the New York Times Travel section as: "Striking Contemporary Art, like a monumental photograph...".
Visit: http://travel.nytimes.com/2012/12/16/travel/a-ritz-ups-the-ante-in-puerto-rico.html?pagewanted=all
Posted by Director, PAW at 2:47 PM No comments: 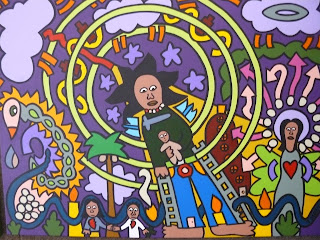 Tamara is a social worker and a community based artist in Providence.  She has worked with young people locally, nationally and internationally creating community murals celebrating the life of the people.  Largely self taught, Tamara’s artwork reflects her Caribbean and Hispanic Heritage in the color choices, symbols, icon and folk art styling in much of the work.  Her themes are often an empowering voice speaking for women, minority peoples and the disadvantaged – giving voice, offering hope and Celebrating Diversity.


About the Artist
I was born in New York City on July 5, 1973 and lived with my Abuela, Mami, Papi and little bro, Rolando, for five years before moving to Barcelona, Spain. My mother grew up in the Bronx, New York, with her parents, who were Holocaust survivors.  My father’s family came from Cuba to America in 1962, leaving everything behind.  I began my first art portfolio and received a medal after entering an art competition in the 3rd grade. During these early years, I was moved by the art of Antonio Gaudi, an artist famous for his beautiful and funky architecture in Barcelona. After traveling with my family to England, France, Switzerland, and Andorra, I moved back to the New York City area at the age of ten and was part of the New York City hip-hop and graffiti scene throughout high school; Soon after, I had my first art exhibit featuring a series of marker designs in 1989. I was very independent and moved by the art of Keith Haring, and the cultural scene that NYC had to offer.


In 1991, I moved to Rhode Island to attend Roger Williams University, where I became involved with campus groups including the Women's Center, the Minority Mentor Program, Hillel, the Multi-Cultural Affairs Committee, and Dean's Diversity Council. I focused my academic work on a psychology degree, which led to a five-year employment at a shelter for teenaged girls. Working with these kids, I discovered that art and culture was a universal way to connect.  I suffered my own heartbreak while working with many young Latinas who had been removed from home, and as a result, were cut off from their cultural roots. I took trips to Puerto Rico, Jamaica, and did a semester exploring the Latino/a and Native American cultures of New Mexico, an experience that sparked my appreciation for pueblo culture, spirituality, and art. In 1998, I graduated with my Masters of Social Work from Rhode Island College, and began working with children at St. Vincent’s Home for Children, who had been abused and neglected. In 2000, I made my first painting, which was followed by about 300 or more paintings, and portfolios of ink, colored pencil drawings and photography.


I use art a form of healing for others and myself. Especially in the work I do with children and getting through my own growth and grief process, I feel lucky to be able to express my truth and stories through different art mediums. With children, I work mostly through collage, color pencil drawings, and watercolors. Some children seem closed off and art and breathing can help to open up. I try to model how to do this, and they seem to feel so validated and understood through the process since there is no judgment. At times, I have felt that if it weren’t for art, I would not survive, so I try to pass on that gift to others. I have been through some difficult times and the result has been a narrative of symbols that I could not even comprehend or verbally articulate. They came pouring out in an unconscious language, which at times helped me understand what I was feeling. That is pretty much what I want to pass along to the children; a way of coping, communication and self-expression.


I am very passionate about documentation, photography and seeing how different cultures and classes live, both here and in other countries.  I’ve done backpacking trips through Costa Rica, Mexico, England, Scotland, Ireland, Italy and Spain, Panama and also lived in Philadelphia for 3 years while working in North Philly’s Latino community. More recently, I have worked on two murals; one in Providence RI and the other in Azua, Dominican Republic while volunteering with a children’s program called Casa Ana in 2013.


My life philosophy is of unconditional love, peace, service and non-judgment. I currently work as a clinical therapist, doing trauma work and using art and other self-expressive therapies to assist in the healing process of children and families. In 2010, I opened my own therapy practice in Providence and am working primarily with the Latino community. Extremely passionate about my work with children/families, I feel so blessed and honored for these opportunities. One dream has been to travel to my homeland, Cuba, to meet my family and reconnect with my Cuban roots.