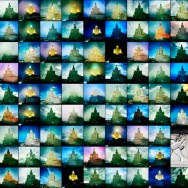 pictures taken with an IPhone

This is the view from my desk, so I see the tower all day long and the constantly changing sky behind it. One day the sky was a deep shade of purple. It was almost unbelievable, so I took a picture with my iPhone resting on the window sill. Then another day the clouds looked like pink comets, so I took another picture. I shared them with a friend who works in the building and she replied “Isn’t 111 beautiful?!” -- I didn’t know people had referred to the building as “111” so that gave me the idea to continue the series through the year and create 111 pictures of 111 westminster. Many of the pictures are beautiful on their own, but seeing them all together and comparing the changing colors is the most impressive way to view the series. If you look closely you can find helicopters, airplanes, and the rare wild peregrine falcons who live on the tower.

About the Artist and to see more of Peter’s Work: 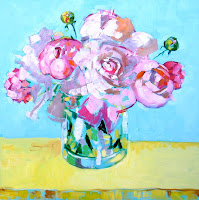 Margaret Maurice Owen was born in Durham, NC in 1973. She studied at Parsons-Paris as a high school student, received a BFA from the University of Georgia in Athens, GA and an MFA from the New York Academy of Art Graduate School of Figurative Art in New York, NY. She lives and works in Providence, RI with her husband, artist Michael Owen and their six year old son. Margaret teaches drawing and painting at a wide variety of institutions and is currently gearing up for a painting workshop in Morocco.

More about the artist: 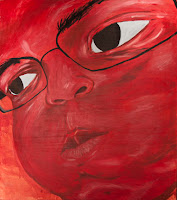 Providence Art windows is pairing with the interior exhibitions at the URI Campus in Providence. Go inside to see more art from this exhibition!

This window is a part of a collaboration of Hera Gallery and The Hive Archive, "Crossing Currents: Feminism Now."

Politics is the art of the possible. Otto von Bismarck. 1868

Feminism is a political stance. Feminism expands what is possible. Instead of the von Bismarck quote that begins this statement, in this exhibition I am using poet, activist, and essayist Adrienne Rich concept of the Arts of the Possible. Rich believes that newness and social change are made through connective creative acts. Like Rich, I see the challenge of the von Bismarck quote to be: How do we make more things possible? In this spirit I invited artists and writers, who’s work builds new lexicons of imagery and troubles well-worn parameters. Creativity can supersede cultural conventions, but when it is really effective it expands what is possible artistically, personally and politically.

This grouping of artists and writers reveals their similarities slowly. All the artists see humans as fantastic creatures capable of dark and delicate ruminations. Each artist sees through a warped mirror. They individually build new worlds of wonder or disquieted longing. Collectively they speak of the fantastic and imagined body, as a metaphor and method to promulgate questions of gender and ethical living.

Kyla Zoe Rafert creates odd Victorian domestic settings populated almost exclusively with pensive young women. Much like the protagonist in Charlotte Perkins Gilman's classic feminist novella the Yellow Wallpaper, they are subsumed into the domestic patterns that decorate their seemingly sedate parlors. Rafert is a consummate printmaker. Formally, her etchings highlight her dead-on draftsmanship and beauty and the eeriness of brutally made marks.

Marissa Paternoster forges dark worlds. With thousands of tiny lines she builds figures that are equal parts post-modern mannerism and cartoon nightmare. Paternoster’s work ceaselessly confronts the viewer with a pained and elusive slippery subject. Her bodies are disjointed and without firm boundaries. In her work gender becomes a horrible carnival ride where desire and etiquette reveal their disgusting and abhorrent origins.

Amy Squires uses the body as her subject. In her site-specific installations and two-dimensional works, she takes traditional feminine tropes and inverts and celebrates them. Her work is influenced as much by minimalism as it is the Feminist Art movement of the 1970’s. Her work is inherently interdisciplinary and encompasses the contradictions of combining corporeality with immateriality.

LNY, reclaims portraiture as a vibrant contemporary art form. His work is global. It can be found on the streets of Japan, Korea, the USA, France, China and Germany. His work humanizes and commemorates individuals moving though the global diaspora. His oversized and painstakingly drawn portraits of immigrants and other dislocated subjects are found in indistinguishable urban sprawls. His work reveals the human politics of place and displacement while meshing socially engaged street art with magical realism.

Natalie Northrup, is devoted to the poetry of formalism. Her work is stridently handmade, revealing the labor inherent to fine art and women’s traditional handwork. Beyond that her work on paper and fabric pieces speak of brevity and abjectness in the same breath. Her roughly hewn marks refuse to be refined or controlled. Her marks read like an untidy Emily Dickenson poem. Her puckered and pulled fabric work reveals the ambiguity between preciousness and benign neglect. She finds the power of ambiguity.

­Arthur Middleton, as a writer traverses unmarked paths guided by his heart light. Though seemingly straightforward his work is not simple. He mines lost historical and imagined modern spaces to find passionate, radical, and tender domesticity. He does not write to come to terms with the world. He writes new worlds into existence.

Author Joanna Ruocco and artist Sarah McDermott maintain an ongoing collaboration across disciplines and time zones. McDermott deftly draws and prints sinuous lines onto textured papers. This saturation of information, both graphic and tactile, dovetail with Roucco’s dexterous uses of language and her flexible and creative lexicon. McDermott illustrated Ruocco’s book The Mothering Coven (Ellipsis Press). Their latest joint effort is the book Compendium of Domestic Incidents. They are 2/3rds of a collective that publishes Birkensnake, an experimental fiction journal. 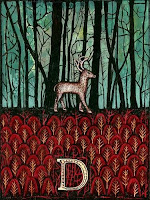 After a year of being a stay-at-home mother, feeling compelled to begin making art again, I decided to create my own entry into the long tradition of alphabet books for children. Always inspired by the paper detritus of our culture, I drew imagery from materials accumulated over many years: old magazines, text books, coloring books, catalogs and junk mail, and combined them into loosely narrative collages. Patterns and details were painted into the collages, resulting in an amalgam of alphabet book, surreal landscape, and medieval icon. I find strange beauty in the darker corners of history, inspiration which found its way into this series as a slightly sinister sense of narrative, reminiscent of folk tales.

Jennifer Eli French was born in Denver, Colorado, and spent her childhood moving frequently. She attended high school in England and earned a BFA from the Rhode Island School of Design. Jennifer lives in Providence with her husband, Rob, and twin sons Hank & Dexter.

Prints of the entire Animal Alphabet are available in her Etsy shop:

To see more of Jennifer's work: