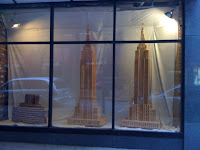 Two Wooden Renderings of a Building, 2009

This is one of those projects that you started nine years ago and finally, actually finished it. Two Wooden Renderings of a Building is primarily made from recycled fence wood that was cut into various sizes. Through the years I would advance the project slowly until it felt right. They are a pair and only work for me in this position.

Found Object is also made of recycled wood lath and plaster. The materials work together to render the skin of this toy Titanic. I call it

Found Object because it is so rough that it looks found.

Walter C. Chaney has a BA from the University of South Florida and an MFA from the university of Utah, SLC, Utah. “Since slides have become extinct I have shown very little, so I appreciate the invitation to show here at Providence Art Windows.” Walter has created models for Hasbro and as a freelance model builder for over 23 years.

From the Director of PAW, “Walt is being very modest. His Two Wooden Renderings of a Building, won second place at the Fidelity Investments Greenworks show in February, where I was honored to show with him. I admired these buildings, and I thought they should be shared with the public once more.”