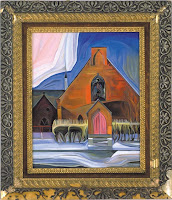 About the Work
It seems not until approaching the 19th century that artists have focused on individual churches as subject matter. Previously artists had achieved some of their finest work in the creation of the structure itself, attempting in their building to evoke the unknowable. To us their work sometimes exhibits a surreal quality, but to those living in that time, it had a profound emotional impact. Abbot Suger, the builder of the first Gothic church (St. Denis, 1144), stated his goal as striving to evoke “some strange region of the universe which neither exists entirely in the slime of the earth nor entirely in the purity of Heaven.” By the turn of last century, images such as Van Gogh’s Church at Auvers (1890), Robert Delaunay’s series of St. Severin (1909), and Canadian artist Emily Carr’s Indian Church (1929) show painters with a strong attraction to the image of the church.

This series of churches depicts real churches but are not realistic renderings. The placement and the repetition of shapes interweaves a tight structure into the picture. In order to add a visual weight and a sense of the past I have surrounded these images with ornate but worn antique frames which lend to the paintings the preciousness of icons. I have hung these paintings on raw canvas to give an impression of quiet, shelter and protection. Below are the detritus of our existence, a by-product of the life force that ties us to this earth while also compelling us to look beyond our physical world.
About the Artist
Kathy Hodge has been a painter working in the Providence area for the last 30 years. This series of paintings was completed in 1999 and can be seen on her website, along with other series, at www.kathyhodge.com.
Posted by Director, PAW at 7:08 PM