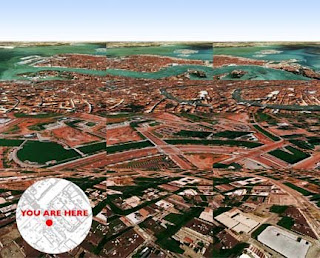 Venice/Providence:YOU ARE HERE, by Gary Duehr

Gary Duehr’s “Venice/Providence:YOU ARE HERE” utilizes satellite imagery of Venice and Providence and merges them to create a a hybrid space. “Where exactly are you?” this image asks of the viewer.


About the Artist
In 2007 Gary Duehr was chosen as a Best Emerging Artist in New England by the International Association of Art Critics. In 2003 Duehr received an Artist Grant in photography from the Massachusetts Cultural Council, and his work has been featured in museums and galleries including Gallery Kayafas and Judi Rotenberg Gallery, Boston, MA; Exit Art, Umbrella Arts, and New York Arts, New York, NY; Gallery Tsubaki, Tokyo, Japan; SKC Gallery, Belgrade, Yugoslavia; and Museo Nacional de Bellas Artes, Havana, Cuba. Past awards include grants from the LEF Foundation and the Rockefeller Foundation.

His public artworks include a photo installation funded by the Visible Republic program of New England Foundation for the Arts, and a commission from the MBTA (Massachusetts Bay Transit Authority) for a permanent photo installation at North Station.

Duehr is codirector of the Invisible Cities Group, which creates "large-scale urban detours" combining performance, poetry, and installations of visual art. He has written about the arts for journals including ArtScope, Art New England, Art on Paper, Communication Arts, Frieze, and Public Culture. Currently he manages Bromfield Art Gallery in Boston's South End.
Posted by Director, PAW at 10:07 AM