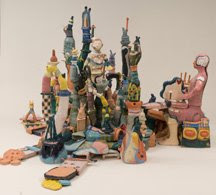 Three of Hearts reflects Lisa Marie Barber's creation of small cities or worlds that project positive interpretations of the human condition. Her main artistic influences are Mexican folk art and altars rooted in her Mexican-American heritage, Bay Area Figurative Abstraction, and urban landscape. The work is intended to be both celebratory and sober, using accumulation as a way to imply richness, value, and process.

Lisa was born in Tucson in 1970, received a BS in Sociology (minor in Art) from Northern Arizona University in 1992, and earned her MFA at the University of Texas at Austin in 1998.After living and teaching in the San Francisco Bay Area for five years, Lisa moved to Kenosha, WI in 2003 to begin a professorship at the University of Wisconsin-Parkside. She was awarded a 2006-2007 McKnight Artist Residency Award, an internationally competitive award in ceramic art, and her work was featured in American Craft Magazine. Solo exhibitions include Gallery 221 in New York City, the Leedy-Voulkos Art Center in Kansas City, Northern Clay Center in Minneapolis, and the University of Arizona in Tucson. Lisa received an Emerging Artist Award from NCECA (The National Council for Education in the Ceramic Arts) and another through The Mission Cultural Center for Latino Arts in San Francisco. A review of her 2007-2008 show at Gallery 221 will be included in an upcoming issue of American Ceramics Magazine. Please go to Lisa's web site for more information about the artist
Posted by Director, PAW at 10:09 AM