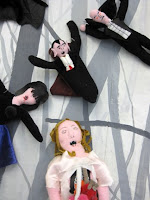 The Museum of Supernatural History: The Legend of Mercy Brown
Acrylic on tyvec, assorted fabric, plywood

About the Work
This display from the Museum of Supernatural History intends to present a supplemental history of the state of Rhode Island. The display aims to recreate a naturalistic local habitat of a two distinct groups of supernatural beings native to Rhode Island: ghosts and vampires. To visit the ghosts in their own environment, take a walk down Benefit Street on College Hill, the most haunted street in America.

The Legend of Mercy Brown
In 1892, a young girl named Mercy Brown died from "consumption" in Exeter, Rhode Island. Over the course of several years, other members of her family had also succumbed to “consumption” and when her brother Edwin became sick, the villagers suspected a vampire. They exhumed the corpses in the family crypt and found nothing but mummies and skeletons, except for Mercy; her body remained unchanged and the blood in her heart was still red. She appeared to have moved inside her coffin. Mercy had been buried in January and the coldness of the winter would have preserved her body, but for the villagers of Exeter these signs were a confirmation of the undead. They removed her heart and burned it, mixing the ashes into water as a potion for her brother to drink. Unfortunately the cure didn’t work and Edwin died later in the same year.

Mercy Brown was the last vampire exhumed in the state of Rhode Island. In 1882, scientists had discovered that the disease, tuberculosis, was caused by bacteria, but unfortunately for Mercy that information had reached rural Exeter too late.


About the Artist
Rachel graduated from the Rhode Island School of Design in 2005 with a B.F.A in Painting. She has worked in commercial art and design in New York City, painting murals, working on movie sets and most recently working on the design team for Window Display at Bloomingdale’s flagship store in Manhattan. Currently Rachel divides her time between Brattleboro, Vermont and Copenhagen, Denmark.
Posted by Director, PAW at 9:32 PM